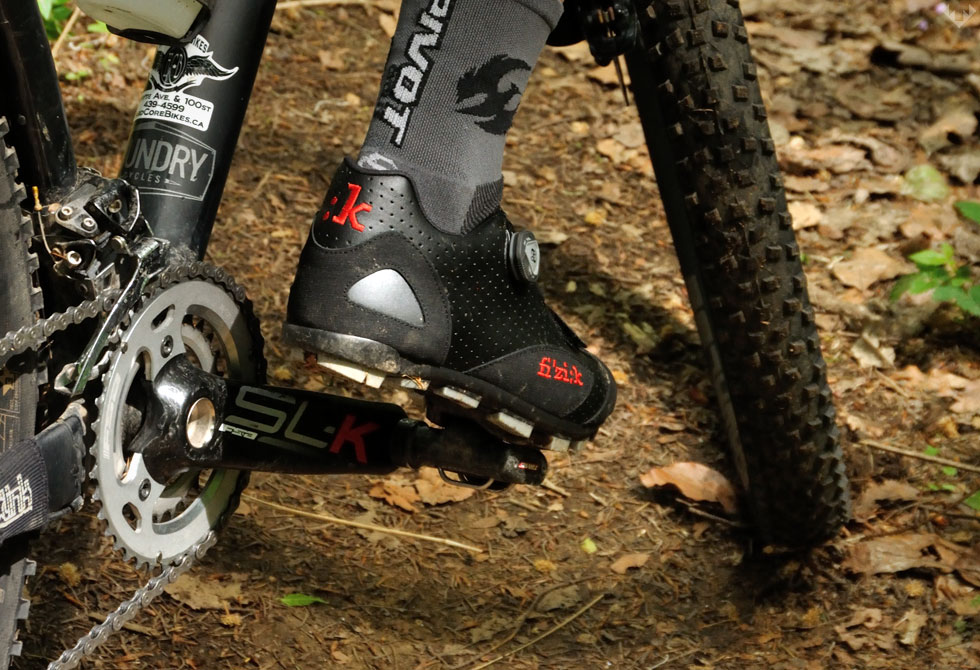 Introducing the 2015 Fi’zi:k M5 Uomo BOA Mountain Bike Shoe Review, where the trail meets the shoe. As mountain bikers there is nothing more important than finding great gear that will enhance your ride. One piece of gear that can make or break a ride is your shoes. We were offered the opportunity to test out the 2015 Fi’zi:k M5B Uomo Mountain Bike Shoes featuring its new BOA system and we couldn’t wait to hit the trails.

First Impressions
I’ve come to expect a high level of aesthetic from any Fi’zi:k product, and the shoes don’t disappoint. The Microtex perforated leather looks very sharp and the reinforced toes, heels, and sides are tidy with clean lines and perfect stitching. Branding is subtle but visible, as the only bold color.  Leave it to Fi’zi:k to find negative space on a shoe. The leather on the inner foot in not perforated and features some subtle retro flare, with a red paint speckle design that evokes heartwarming memories of mid-90s KHS Montana Comps. All good stuff.

Before we go on, let’s be clear: I’m not in the market for a new mountain bike shoe. In the last 15 years, I’ve owned exactly three pairs of mountain bike shoes, all the same make and model, and I would buy another pair of them today if needed. Suffice it to say, the Fi’zi:k shoes had an uphill battle ahead of them to earn my allegiance. But with an open mind, I slipped them on and hit the trails.

On the Trail
In my experience, a good cycling shoe needs three things: 1) a stiff sole for effective power transfer, 2) a secure heel cup to hold feet in place when pulling up on the pedals, and 3) a solid and reliable retention system. A good mountain bike shoe also needs an effectively grippy tread. So how does the Fi’zi:k M5B stack up?

Without some fancy lab equipment in a lab, it’s hard to quantify the power transfer of the Fi’zi:k M5B compared to other reputable brands. But I can say this: when out on the trail, the Fi’zi:ks feel as solid as any shoes I’ve ridden. Under powerful accelerations and steep hill climbs, there is no noticeable flex at all in the shoe. While the M5B lack the full carbon sole featured on the Fi’zi:k 3- and 1-series shoes, the “carbon reinforced nylon” as Fi’zi:k labels it seems to perform nicely. The true test for a non-carbon sole, of course, will be whether the stiffness persists over time and mileage. (The shoes had at least enough power transfer to break my chain on a test ride, so that’s something.)

The second requirement, effective heel retention, often depends on finding a shoe that fits properly. Part of this is avoiding the common up-sizing mistake when trying on cycling shoes that feel snug. But part of it is also in the design. Effective and powerful pedaling requires riders to pull up on the pedals during pedal recovery, and heels can’t be pulling away from the shoe during this motion. In this respect, I can give the Fi’zi:k another decent rating. Despite my test pair fitting slightly on the roomy side, the M5Bs held my heel in place very well, with no noticeable movement, even during hard pedaling.

Much of this foot security probably has to do with the retention system as well. Now, I’ve always been somewhat suspicious of the flimsy-looking cable retention systems, especially on mountain bike shoes that take a constant beating out on the trail. To move me from my preferred Velcro-and-ratchet system, the Boa system on the Fi’zi:k would have to prove itself. This isn’t the first cycling shoe to use a cable retention system, of course. In fact, the Boa system found on the Fi’zi:k shoes itself is made by an independent company whose retention systems (according to their website) show up on over 25 million products worldwide, including cycling shoes, snowboarding boots, golf shoes, and even some medical devices. That’s a pretty impressive resume. But it doesn’t mean anything until it’s put to a trail test. 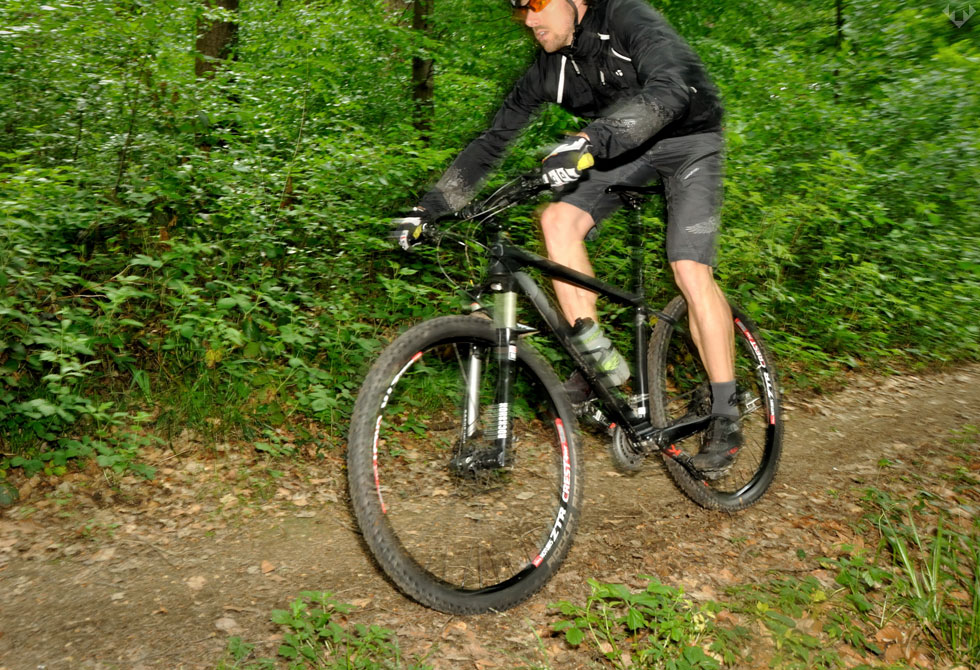 My first observation of the retention system was the ease of getting the shoe on. The whole cable system releases in a quick pull up on the dial, providing ample room to get feet in and out (the off-road triathlon crew must love these things in transition). Once feet are in the shoe, the cables are tensioned by a quick spin of the dial. The dental-floss-thin tightened up snugly and evenly around my feet with no issues. Post-ride, even with some German Black Forest mud caked on them, the cable release worked flawlessly. Again, time and mileage (in bad weather especially) will be the true test of the retention system on a mountain bike shoe.

So it works just fine. But honestly, compared to my trusted ratchet/Velcro system, I would have been somewhat indifferent to the cable system. But with one exception: while out on the bike, tightening up the shoes while still in the pedals (as is often necessary after the first few minutes of riding, as feet settle in) was so much easier than with a traditional ratchet/Velcro retention system. That might be a deal-breaker, in favor of the cables. The ability to quickly dial the shoes a few clicks tighter mid-ride or (more critically) mid-race, basically without pausing pedaling, is a huge benefit. Edge goes to the Boa on this one.

The sole treads are nothing to write home about, but proved adequately grippy, even for some slimy pushing through the Spring mud, so no complaints there. Cleat mounting was a cinch, with adequate space around the mounting bolts to not interfere with pedal engagement. The welcome inclusion of mounts for toe studs is a requirement if the shoes are to be considered for all-weather riding or cyclocross racing.  While it would be nice to see replaceable grips on the soles, it would be remarkable at the shoe’s pricepoint (€128). No indication on Fi’zi:k ‘s website whether the 3- or 1-series shoes feature this. 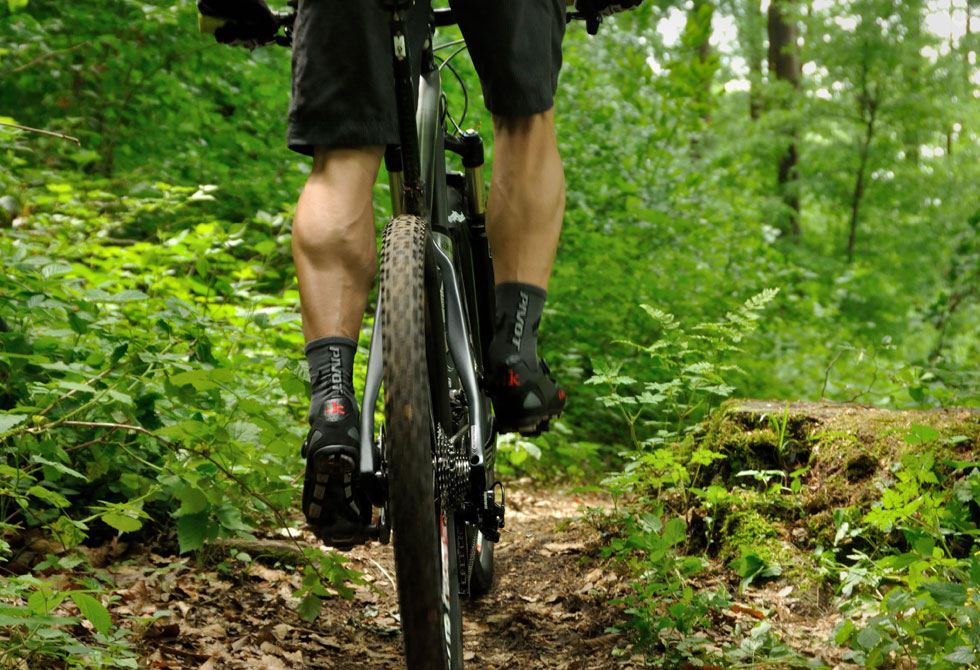 Some Fit Notes
I have a fairly narrow foot, which usually make me a nice candidate for a lot of Italian cycling shoes. But the Fi’zi:k definitely fit a bit larger in the toe-box (though not through the upper foot) than my usual Italian brand. This meant the lower Velcro strap had to be pulled relatively hard to get it tensioned, and it still felt roomy. Sizing down wouldn’t have fixed this. Interesting that Fi’zi:k chose not to run with a triple Boa strap down to the lower foot, even on the 3- or 1-series. That said, anyone with a normal to wide foot should fill the shoe out nicely.

If there were any fit concerns for me, it was in the uppers. The M5Bs definitely came up higher on my ankle and instep than other shoes I’ve tried. This led to a bit of friction along the ankle bones and pressure on the instep. But this was only noticeable towards the end of long rides and may very well go away as the leather on the shoes breaks into my feet. Again, time & mileage will tell.

The Verdict
Once again, Fi’zi:k has produced a sharp-looking yet nicely understated product that performs admirably. And in an age of mass production in overseas factories, it’s nice to see “Handmade in Italy” still stamped on all Fi’zi:k products. The production quality of the Fi’zi:k M5B shoes is evident and nothing on the shoes, including the Boa retention system, is gimmicky.

Of course, good cycling shoes need to stand the test of time, as durability and the ability to maintain stiffness through the miles is crucial. Lucky for me, I’m happily looking forward to more miles of singletrack in the M5Bs.

Buy it at:
Jenson USA
Amazon

Special thanks to our contributor Dave Roberts of Germany for his review of the 2015 Fi’zi:k M5B. 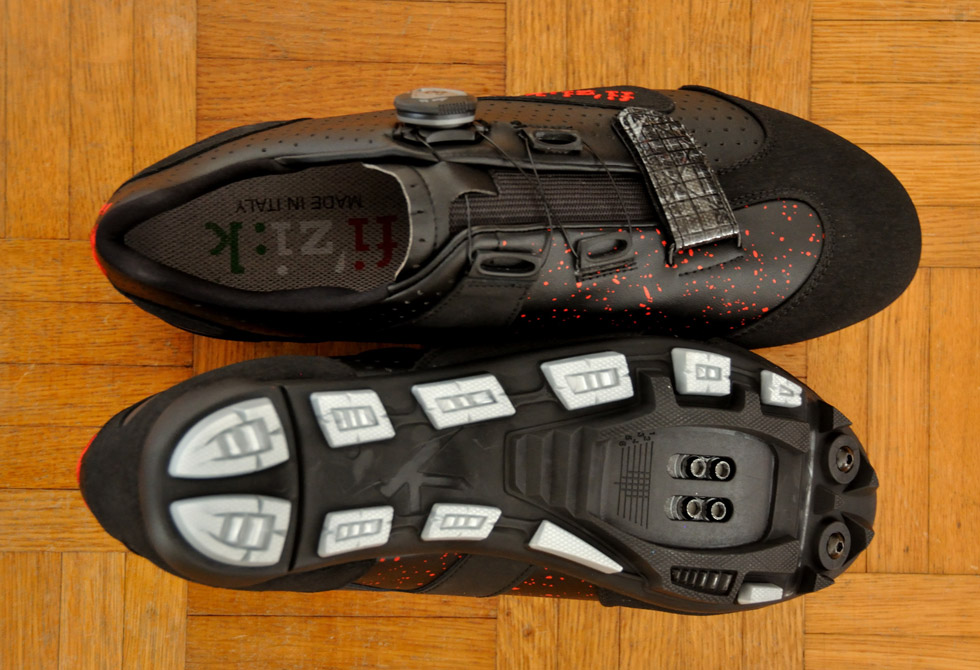 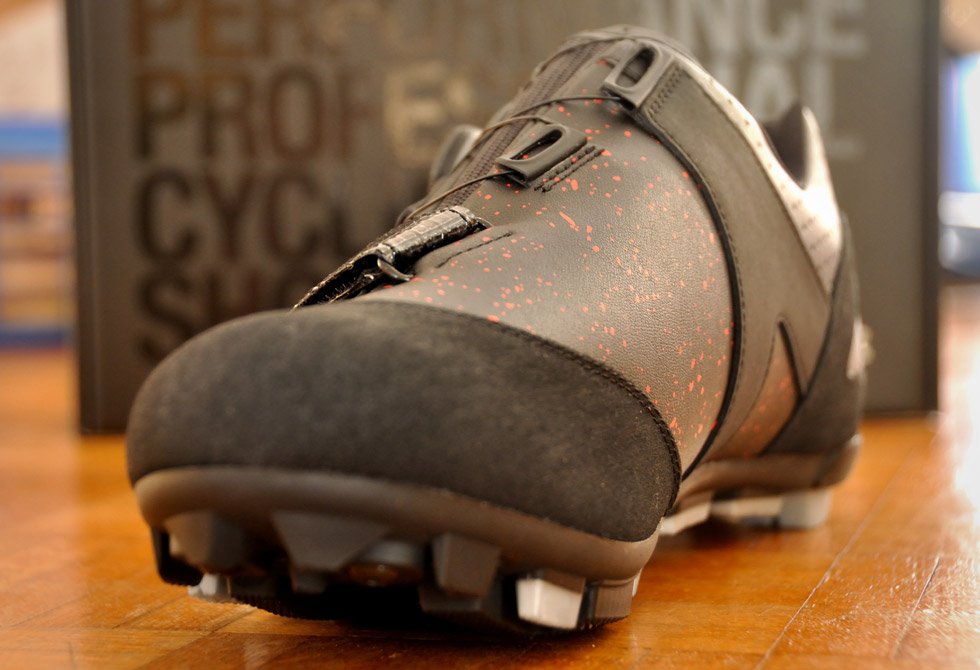 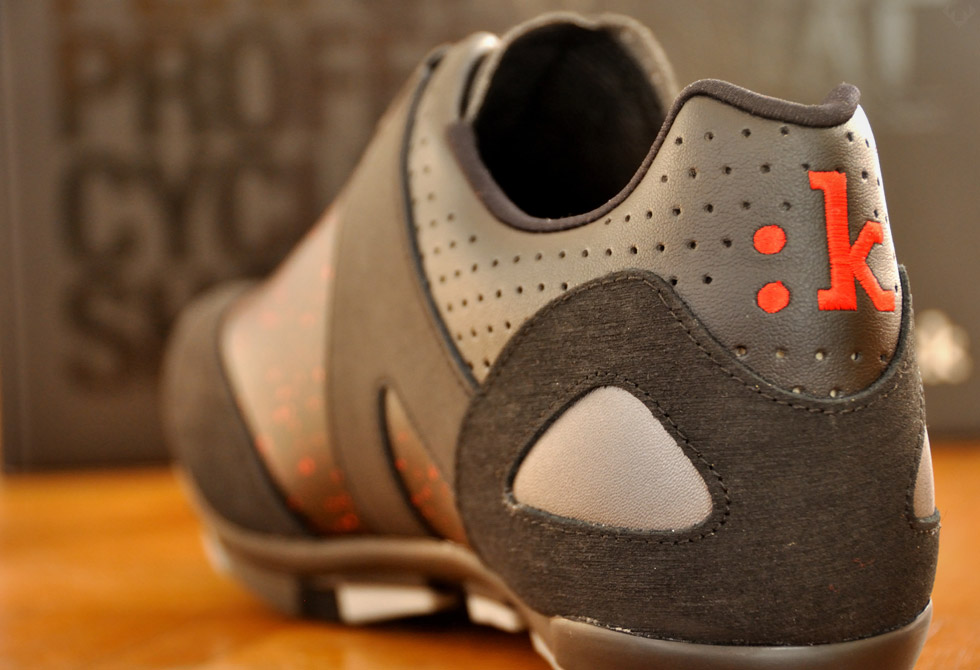 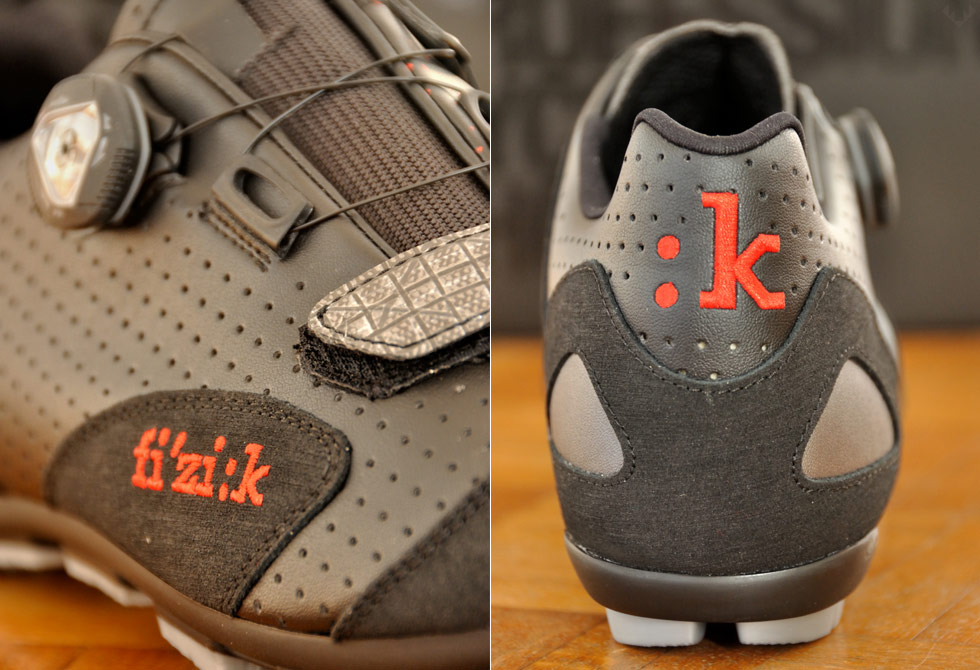 We originally profiled the Cleverhood earlier this year and have been anxious to put it through a full test. As we guessed, the...

Stay glued to the path this winter with the Vargo Titanium Pocket Cleats. If you enjoy winter as much as we do, why...